Arutprakasa Vallalar Chidambaram Ramalingam (5 October 1823 – disappeared on 30 January 1874), whose pre-monastic name was Ramalingam, is commonly known in India and across the world[1] as Vallalar. He was one of the most famous Tamil Saints and also one of the greatest Tamil poets of the 19th century[2] and belongs to a line of Tamil saints known as “gnana siddhars” (gnana means higher wisdom).

The Samarasa Suddha Sanmarga Sathiya Sangam[3] was spread and passed on by him not only in theory but mainly in practice by his own way of living which itself is inspiration for his followers.Through the notion of Suddha Sanmarga Sangam, the saint endeavored to eliminate the caste system.[4] According to Suddha Sanmarga, the prime aspects of human life should be love connected with charity and divine practice leading to achievement of pure knowledge.

Ramalinga Swami advocated the concept of worshipping the flame of lighted lamp as symbol of Siva.[5]

Ramalinga Adigal was born in a Karuneegar family as fifth son to Ramiah Pillai and his sixth wife Chinnamaiar, who lived in Marudur in South Arcot district, a village 15 km north-west of Chidambaram. Ramiah Pillai’s first five wives had died childless and in quick succession. Chinnamaiar, however, bore him five children; the older ones were two sons, Sabhapati and Parasuraman, and two daughters, Sundarammal and Unnamali. They named their youngest child Ramalingam.

When Ramalinga Adigal was five months old, his parents took him to the Chidambaram Temple. It is said that this infant laughed aloud when the priest offered the traditional Deepa aradhana to the Lord. This apparently routine visit to the temple thus offered him his first spiritual experience as well. In later years he said of the experience,”No sooner the Light was perceived, happiness prevailed on me”,”The sweet nectar was tasted by me as soon as the Arutperunjothi (Supreme Grace Of Light) became visible”[6] In 1824, the very next month, his father Ramiah Pillai died. His sudden death forced a helpless Chinnamaiar to shift to the residence of her mother at Chinnakaavanam.After two years she shifted with her eldest son Sabhapati and his wife Paappaathi at 31/14 Veerasamy Pillai Street, Sevenwells, Chennai 600001.

When Ramalingam was five years old, Sabhapati decided to formally educate his youngest sibling, Ramalingam, but the young child however showed a deep disinclination towards formal education but on the other hand preferring trips to the local Kandasamy temple. Sabhapati was convinced that the child was on a self-destructive path. As a punitive measure, he forbade his wife from giving Ramalingam his daily meal. His compassionate sister-in-law, however, surreptitiously fed him food and gently prevailed upon him to pursue his studies seriously at home. Ramalingam relented on the condition that he be given a separate room of his own. Now, in the solitary confines of this room, he set up a mirror and in front of it a small, lighted lamp. With these as aids he relentlessly meditated and this was the beginning of the young boy’s spiritual journey. The first reward came in the form of a vision of Lord Muruga. In the saint’s own words: “The beauty endowed divine faces six, the illustrious shoulders twelve”[7]

His elder brother Sabhapati was a learned scholar and upanyasaka (one who tells religious stories).It so happened that once Ramalingam had to substitute for his brother at an upanyasam session. His brilliant exposition and uninterrupted flow of words while enunciating a verse from the `Periyapuranam’, an epic poem by Sekkizhar narrating the episodes connected with the 63 Nayanars, amazed onlookers. Later his brother also graciously acknowledged the mental and spiritual superiority of his brother. Ramalingam himself expresses his gratitude to the Divine when he says:”Effulgent flame of grace that lit in me intelligence to know untaught”[8] As he made quantum leaps in his spiritual journey he progressed from being a devout Lord Siva devotee to worshiping the formless. Totally averse to money, he was later on to shun food and even sleep. He renounced the world at the age of thirteen. Surprisingly he remained fit in form. A hurdle on his chosen path came in the form of a forced marriage to his sister’s daughter. It is said that the bridegroom spent the nuptial night reading the Tiruvasakam. Possibly his ability to remain in fit form was a result of his supposed physical transformation.

At the age of 35 he left chennai during the year 1858.First he went to chidambaram where he had a debate with kodakanallur sundara swaamigal.At the request of one Mr. Ramakrishna reddiar he went to his house at karunguzhi and stayed there for 9 years. He made an indelible mark in the religious history of India when he came out openly against its caste system and the negative impact it had on society. In an attempt to redress the situation he established samarasa vedha sanmarga sangam the name of which was changed during the year 1872 as `Samarasa Suddha Sanmarga Satya Sangam’[3] in 1865, which means `Society for pure truth in universal self-hood’. He had also by this time shifted to a place called Karunguzhi from Chennai. His next step in establishing a practical approach to religion was the setting up of a free eating house called The Sathya Dharma Salai[9] in a place called Vadalur in 1867, where all could eat without any distinctions whatsoever. Ramalinga Vallalar abhorred non-Vegetarianism. In one of his poems he says:

When I see men feeding on the coarse and vicious food of meat, it is ever-recurring grief to me.[10]

It is significant that the land on which this eating house was built was donated by a few landowners. The registered document is available for inspection even today and the service of providing free food also continues to this day. 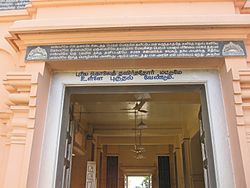 Entrance to the Sathya Gnana Sabha. The sign above it reads “only those who have renounced meat and murder should enter”

Ramalinga Adigal opened, the “Sathya Gnana Sabha” (Hall of True Knowledge) at Vadalur on January 25, 1872. One of the primary teachings of Valallar is “Service to Living Beings is path of Liberation/Moksha“. He declared that death is not natural that our life’s first priority should be to fight death. He declared religion in itself is a darkness. He laid a very great emphasis on being vegetarian. He said God is “Arul Perum Jothi” who is personification of Grace or mercy and knowledge. He said the path of compassion and mercy are only path to God.

In 1867 he established a center for feeding the poor people. On the inaugural day he lit the fire of the stone stove, with a declaration that the fire be ever alive and the needy shall be fed forever. Around 1872 he established the Sathya Gnana Sabai, hall of True Wisdom Forum and ensuring it was entirely secular . This place is not a temple as no offerings of fruits or flowers could be made, and no blessings were given. It was open to people of all castes except those who ate meat, who were only allowed to worship from the outside.He wrote in detail about the pooja to be performed in gnaanasabai.Those who are below 12 years or those who are above 72 years alone were expected to enter gnaanasabai and do poojas. The oil lamp lit by him is kept perpetually burning. He said that our soul is blinded by seven veils.[11] There are seven cotton fabric screens, representing the seven factors that prevent a soul from realizing its true nature.

He advocated a casteless society. Vallalar was opposed to superstitions and rituals. He forbade killing animals for the sake of food. He advocated feeding the poor as the highest form of worship. He condemned inequality based on birth.

Today there are spiritual groups spread out all over the world who practice the teachings of Swami Ramalingam and follow the path of Arul Perum Jothi.

Kandha kottam Kandaswami Temple[13] is located at Parrys Corner in Chennai. At the entrance of the temple, there is a hall called Parivedan mandapam. Sculptured image of Vezhmugathu Vinayakar in sitting and standing positions are kept on either side of the mandapam. To the front of the Artha mandapam, there is a dwajasthambam (Flag Staff). The Mukha mandapam is where the idols of Sarva Siddhi Vinayakar, Meenakshi Sundareswarar, Idumban, Sri Ramalinga Swamigal, and Pamban Swamigal are found.

Perhaps one of the most notable factors of this sage is the claim that he supposedly attained a divinization of the physical body. He attained a total of 3 transformations. His first transformation was the transformation of his normal human body into the Perfect Body, between the supposed attributes of this body are total invulnerability to everything thus rendering him effectively immortal and impervious to any kind of damage as well as having the attributes of being omnipotent, omnipresent and omniscient this body is apparently made of Divine Light.

Beyond this state there was a subsequent transformation by which the Perfect Body transformed further into the Grace Body possessing the following attributes: This body have automatically a young appearance like that of a kid, can be seen but can’t be touched, and has complete and absolute dominion over all the Siddhis.

Even beyond the State of the Grace Body supposedly there was a third and final transformation in which the Grace Body was transformed into the Bliss Body. This body is the body of the Supreme Godhead and is automatically omnipresent but can’t be perceived by anyone.

By achieving this Ramalinga demonstrated that the ultimate states of spirituality can in fact be attained in this world with the physical body and death is not a necessity to experience the ultimate spiritual experience.

Ramalingar raised the flag of Brotherhood on his one-room residence Siddhi Valakam[17] in Mettukuppam on October 22, 1873. He gave his last and most famous lecture, entreating his audience to undertake a spiritual quest and look into the “nature of the powers that lie beyond us and move us,” and asking them to meditate on the lighted lamp from his room, which he placed outside.

Adigal on January 30, 1874, entered the room and locked himself and told his followers not to open it. He said that even if they did open it they would find nothing (United with Nature & ruling the actions of ‘all of the alls’ – as told in his poem called ‘Gnana Sariyai’). His seclusion spurred many rumors, and the Government finally forced the doors open in May. The room was empty, with no clues. The Madras District Gazetteer published by the South Arcot District in 1906 records his disappearance.[18] Every one of us must clearly understand that the physical body of Ramalinga swamigal was neither buried nor cremated. He is living even today with his body.

Some of his songs were set to music by Sirkazhi Govindarajan.[19]

On 17.8.2007 the then Chief Minister of TamilNadu released postage stamp on Vallalar.After that writ petition was submitted against the portrayal of Ramalinga Swamigal with ‘thiruneeru’ (sacred ash) on his forehead.But the Madras High Court has declined to entertain that writ petition[20]

One thought on “Ramalinga Swamigal”